The Government of Norway tightens the regulations regarding staffing enterprises

December 5th, The Norwegian Parliament (Stortinget) has processed a change in the Norwegian legislation strictening the regulations regarding leasing out and hiring temporary staff from staffing enterprises. Normal entrepreneurs and service enteprises is not affected by the changes.

It is expected that the legislation will be passed before new year’s. Plans for implementation are not ready, but the aim is to implement the legislation starting 2023. The Ministry of Labour and Social Inclusion has proposed exemptions for certain groups, such as healthcare workers, specialized/ skilled advisors/ consultants, and the agriculture industry.

Furthermore, the Ministry will also decide on a regulation regarding transitional arrangements for contracts already in effect. This is expected to be implemented Q1 2023.

As mentioned above the proposed changes in legislation is limited to the hiring from staffing enteprises, meaning firms with the purpose of renting out workforce. Other types of contracting, such as temporary hiring permanently employed workers staff between entrepeneur firms, will still be permitted.

The governments reason for the proposed legislation is a rising concern that the Norwegian WEA opens for a wide-ranging permittance of hiring workforce temporarily. In addition, the regulations are possible to work around given the arbitrary nature of the wording.

The change is that hiring workers as listed in point A will be prohibited.

There has also been proposed a stipulation to prohibit hiring workforce in the construction industry for a specified geographical area. This will affect the wider “Oslo-area”, construction sites in «Oslo, Viken og Vestfold”. The stipulation will likely be implemented Q1 or Q2 023.

Firms bound by collective agreement with a National Union, i.e., a union with more than 10,000 members, can agree upon exemptions. For this to be applicable, there must be an elected representative representing a majority of the category the hired workforce falls under.

Clarification of the distinction between hiring staff and use of subcontractors

A new sentence will be implemented to the Employment Protection Act, paragraph 14-12, regarding what conditions are to be weighted in the assessment to whether a contract agreement includes hiring temporary staff or is considered a service contract.

Whether the hiring company has instruction authority over the workers and what company could held accountable for the work result, is to be especially weighted. Other conditions that will determine the outcome of the assessment:

Separate regulations will be made to exempt the following situations:

We will publish more information once the decision has been made and date of implementation is settled.

You are welcome to contact us if you have any questions. 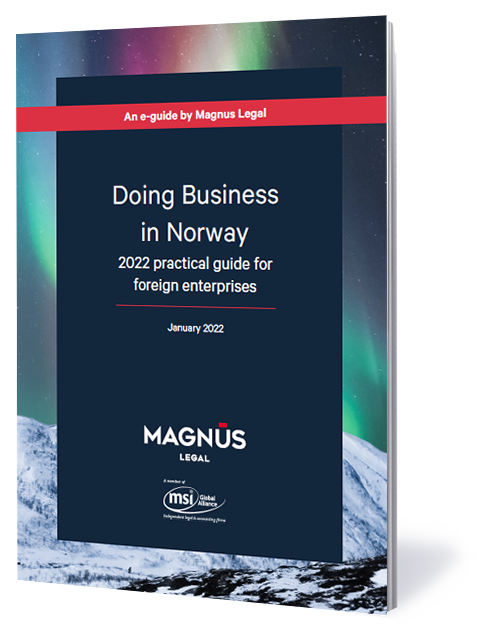 This is a guide for companies wanting to explore business opportunities in Norway. This guide gives a practical overview of the required actions applicable for foreign enterprises with business operations in Norway.

Import to Norway – VAT and customs

Do the right things when doing business in Norway